You are here: Home / Menstrual Cup FAQs / Male Menopause: Is it Really a Thing? | Andropause 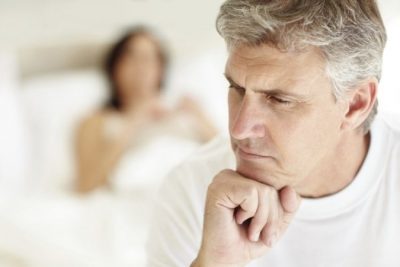 Much like women, men also undergo certain changes within their bodies after reaching their late forties and early fifties. Some of these changes include a lower sex drive or libido, weight gain, erectile dysfunction, depression, fatigue as well as other emotional symptoms that may be similar to the changes women tend to experience.

However, this phenomenon is sometimes termed as male menopause or  andropause. But is it nothing more than an urban legend or is it real and if it is, is it anything like what women go through?

We will try our best to look into this matter with greater depth and see if we can’t reach a satisfying conclusion.

Changes In the Male Body

When it comes to women, menopause signals the end of a woman’s menstrual cycle, which means she no longer has the ability to conceive. This is because their hormones, including progesterone and estrogen, start to slowly decline until her eggs lose their fertility.

But with men, the changes occur slowly and less abruptly. The reduction in their hormone (testosterone) levels is less severe than that of women. It’s similar to puberty, where women have one big thing that happens (they menstruate), where men go through a number of less pronounced changes.

Instead of using the term “male menopause,” health professionals describe this phenomenon as andropause, testosterone deficiency or late-onset hypogonadism.

According to the Northwestern Memorial Hospital in Chicago, IL researchers, an estimate of 5 million men in the United States are affected by male menopause.

Can Men Go Through Menopause?

United Kingdom’s National Health Service (NHS) has described and listed the characteristics, signs and symptoms of male menopause in various ways such as:

According to a study published in the New England Journal of Medicine (NEJM), the most recurring symptoms of male menopause are erectile dysfunction and a lowered sex drive.

Other symptoms include being unable to walk for more than 1 kilometer, a loss of energy, not being able to engage in healthy activities such as running or lifting sturdy objects. Doing regular things such as bending, kneeling and stooping become more difficult.

Fatigue and sadness are also linked to the changes in male hormone levels.

The only things that were not associated with male menopause include anxiety, getting up from chair problems, poor concentration, nervousness, sleep pattern changes and feeling worthless.

What are the Symptoms of Male Menopause?

After reaching the age of 30, the male hormone levels begin to gradually decline. These levels fall by 1% on average, and less than 2% yearly.

Upon hitting their seventies, many men have 40% less testosterone in their bodies than when they were 30.

However, this decrease of hormone levels happens normally and isn’t believed to be caused by male menopause. Because if this was the case, then every man would go through this change.

This indicates that changes in male hormones alone aren’t what lead to the development of male menopause.

Could be Caused by Other Factors Too

In fact, other factors that result in this phenomenon include lack of exercise, alcohol consumption, smoking, anxiety, stress as well as sleep deprivation.

Erectile dysfunction can occur due to a neurological problem or blood vessel changes.

Men undergo a phase known as ‘midlife crisis’ in which they strongly contemplate the things that they’ve accomplished both personally and professionally. This cause may be the result of depression, which may then lead to symptoms that are linked to male menopause.

Hypogonadism is a condition in which there is insufficient production of hormones in the testes. For younger males, this could bring about delayed puberty. If this happens at an older age, and could be lined to either type 2 diabetes or obesity, then symptoms of ‘male symptoms’ may start showing up.

Research reveals that a portion of testosterone is converted to estrogen by an enzyme called aromatase.

One study shows that some symptoms of testosterone deficiency is attributed partially or mostly to estrogen deficiency.

There is one study, that says male menopause was medicalized not because of scientific research, but because of ‘lay people and medical popularizers.’

Male menopause is not a term used by professional physicians and its symptoms, as brought about by lay people, are debatable. Some argue that the symptoms are due to low testosterone, low estrogen, obesity, mental health issues or changes in lifestyle.

Since there is no clear condition that has been identified, those men who experience male menopause-like symptoms will receive treatment accordingly.

For instance, a man who is having trouble with obesity, will be advised to become more physically active and maintain a healthy balanced diet in order to lose weight.

An appropriate treatment will be required for cardiovascular and heart disease, and also diabetes. Being able to manipulate blood glucose levels can lower symptoms.

Blood and diagnostic tests may be conducted to inspect any traces of cardiovascular disease.

Patients with anxiety or depression symptoms may be referred to a psychiatrist or psychologist or may prescribe behavioral therapy, antidepressants or perhaps both.

Sometimes doctors may even recommend testosterone therapy, but its effectiveness is sketchy. In some cases, testosterone therapy can increase the risk of prostate cancer and urinary tract blockage. It can also accelerate sleep apnea, epilepsy and ischemic heart disease.

What about Herbal Remedies and Supplements?

A range of vitamins and supplements are advised for the treatment of male menopause. However, herbal remedies, according to Mayo Clinic, are not proven to be an either effective or safe treatment for testosterone deficiency at old age. In fact, it may even be considered hazardous.

Male Menopause: Have your Say!

Do you think males go through perimenopause, and menopause just like women do? Leave a comment below and let us know your thoughts.

Signs Perimenopause is Ending | When Does Menopause Start?

Perimenopause: Everything you Need to Know | Pre-Menopause