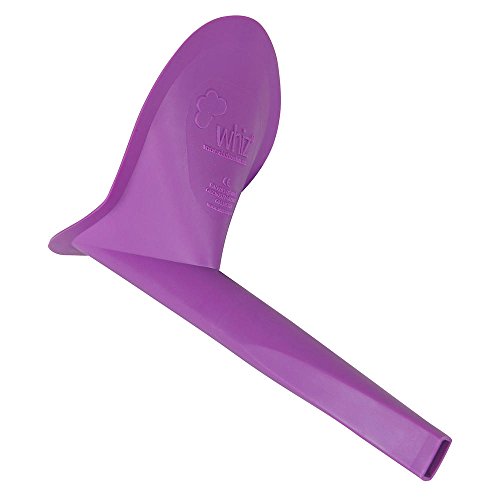 If you’re looking for a device that let’s you pee while standing up, then you’ll need a pee funnel like this one from Whiz Freedom. Here are a few quick facts about this female urination device:

It can be difficult to find pee funnels in stores, so that’s why we recommend shopping online. Find this popular pee funnel brand here: Whiz Freedom on Amazon. 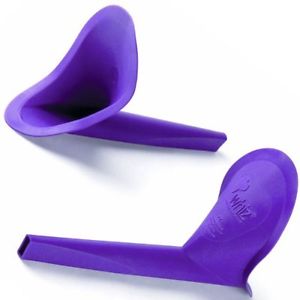 If you’re ever thought that you’d love to pee like a guy, you’ve come to the right place. The Whiz Freedom, and other pee funnels allow women to pee while standing up.

You might want to do this when you’re engaging in any sort of outdoor activity—camping, hiking, cycling, climbing or boating. They’re also great for travel, or public bathrooms at festivals when sanitation is a bit of an issue and you’d rather not touch anything if you don’t have to.

Or maybe you’re a trans person and would feel more comfortable peeing while standing up? Check out the Whiz Freedom to see how it works for you.

As far as quality goes, we love the design and materials of the Whiz Freedom. It’s nicely made from medical grade thermoplastic elastomer (same as the Meluna Menstrual Cup), which is also used in other medical devices.

Most people who try it out find it easy enough to use after a bit of practice. As far as funnel size goes, it’s mid-range, so you do have to be a bit careful with how you place it. However, as long as you use some caution, it works without leaking and spilling.

How to Use a Pee Funnel 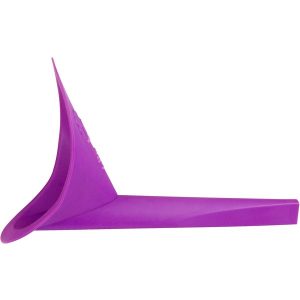 It can be difficult to find the Whiz Freedom Female Urination Device in stores, or any of these kinds of products for that matter. In our experience, the best place to find all the brands, styles and colours is on on Amazon.

Want to pee while standing up? Not leave your tent on a cold, rainy night? Pee discreetly when you don’t have access to a toilet? Then a pee funnel is what you need!

Check out the Whiz Freedom today:

There are plenty of reasons why you might want to use a pee funnel. Of course, we’ve already mentioned all sorts of outdoor activities such as when you don’t want to remove your rock climbing harness, or you’re in a boat.

However, there are plenty more reasons that people would want to use a female urination device which allows them to pee while standing up. We’ll share just a few of them here.

If you have any sort of lower body surgery, especially knee surgery, it can be difficult to sit down on the toilet. Of course, you could pee in the shower, but this is messy every single time and requires you to take your clothes off, which could cause some serious discomfort post-surgery.

That’s where a pee funnel like this one from Whiz Freedom can come it. It allows you to pee standing up into the toilet, saving your knees from having to sit down in a low position on the toilet.

For many people, post-surgery, it’s kind of a lifesaver.

“I’m so happy that the nurse at the hospital recommend the Whiz Freedom Female Urination Device to me after my knee surgery. I seriously never even knew these existed, but it was kind of a lifesaver when I went home. I used it for the first couple of weeks.” Nancy M.

Some trans people might feel more comfortable peeing while standing up. A pee funnel allows them to do this easily.

Camping in the Cold

If you’re camping in a cold climate, the last thing you want to do is get out of the tent to go pee. It’s freezing out there! That’s where a pee funnel comes in. You can use it to pee into a water bottle inside your tent, which you’d empty and clean out in the morning.

Some people work very remote jobs without access to a bathroom. It’s fine if there are lots of trees around. But, if not, it can be hard to pee discreetly. That’s where the Whiz Freedom Pee Funnel can come in handy. You can pee standing up next to a car or something like that and nobody might even notice.

What People are Saying about the Whiz Freedom Pee Funnel

“The Whiz Freedom pee funnel device works very well when it works, but it is also prone to leaking unless you’re really careful. Seriously. Ever single time you have to place it carefully so as not to pee all over your clothes and shoes.”

“I love the design of the tube which prevents splashing and overflow. Nice work Whiz Freedom—you’re now my go-to brand. I only wish it was a bit cheaper.”

“It’s great if you want to pee in a bottle or something like that. However, you do have to pull down your pants if you want to use this pee funnel. Some of the other ones only require that you push you underwear to the side. I think it’s called the Pibella.”

What about Disposable vs. Reusable Pee Funnels?

A common question that people have is whether or not they should consider a reusable pee funnel (like this one from Whiz Freedom), or a disposable one (for example, the Travel Jane/Travel John).

Now we know the name of our website may be a giveaway (Reusable Menstrual Cups), but we much prefer reusable options! They are way more affordable over the medium to long-term, and they’re also way easier on the environment.

That said, pee funnels are not for everybody. If you want to try them out before investing more than a few dollars, go disposable to start with. See if you like them, and if you do, then consider a reusable female urination device.

It’s a nice solution for your quandary: disposable vs. reusable pee funnels.

How to Use the Whiz Freedom Pee Funnel

Check out the instructions that come along with the Whiz Freedom female urination device. You’ll be peeing while standing up in no time! 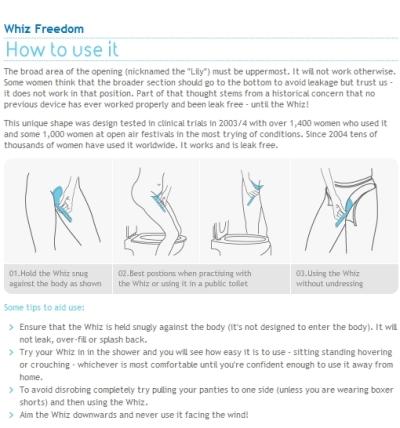 The Takeaway on the Whiz Freedom Pee Funnel

If you’re looking for a device that will allow a woman to pee while standing up, then you’d do well to consider the Whiz Freedom. It’s a top-quality pee funnel that most people are pretty happy with.

It works, although it does require a bit of practice in order to not spill on yourself. The materials used in the product are soft and feel nice next to the skin. It also repels fluids extremely well, so you’ll find that it’s mostly self-cleaning with just a little shake after using it.

Although it’s a bit more expensive than other similar devices, it’s a nice product and maybe worth the higher sticker price. If you want to pee while standing up, give it a try for yourself.

The best place to buy the Whiz Freedom is on Amazon. Check it out now:

Compare all the Pee Funnels

Have your Say about the Whiz Freedom Pee Funnel!

What do you think about the Whiz Freedom Female Urination Device? Have you tried it? Do you want to?