You are here: Home / Menstrual Cup Comparison / Lunette Cup vs Saalt Cup: Which one is Best? 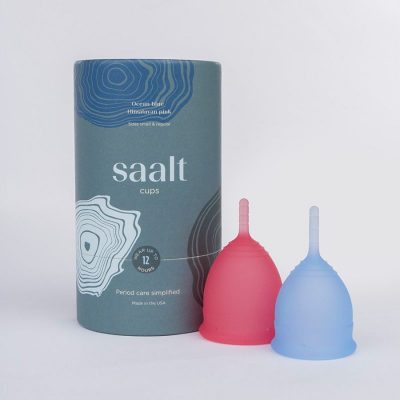 Which one is the winner? Lunette Cup vs Saalt Cup

It’s a battle of the old vs new. The Lunette Cup, out of Finland has been around for decades and is one of the best menstrual cups that money can buy.

The Saalt Cup has been around a few months, but it’s already getting some serious attention. It’s a top-quality cup that’s made in the USA and it has some excellent initial reviews.

In reality, the Saalt Cup and the Lunette Cup are very similar to each other, and are in fact, almost identical in terms of sizing and design. It’s almost like the Saalt Cup company found something that worked (the Lunette!) and modelled their own cup after it.

The thing that is not so similar is the price. The Saalt Cup is usually a few dollars cheaper. It also comes with a 2-cycle, money-back guarantee. It’s for these reasons that we give the edge to the newcomer, the Saalt Cup.

The Lunette is one of the oldest menstrual cups on the market today, along with the Mooncup and the Diva Cup. It’s stuck around for so long because it’s that good!

It’s made in Finland from top-quality, medical-grade silicone. It has some of the highest user ratings on Amazon as well.

It’s actually the first menstrual cup that many people start with it, and they end up sticking with it for the rest of their lives. In particular, people love the firmness of it. It’s stiff enough that it’s easy to insert, but it’s also thin and pliable and feels quite comfortable.

You can easily get the Lunette Cup from the company website:

—>Check Prices on the Lunette Cup<—

What People are Saying about the Lunette

“I wish I’d started using the Lunette years ago. It was my first menstrual cup and I found the learning curve to be less steep that I thought it would be. I read the instructions, inserted it, and found that it didn’t leak for the most part. Love it!”

“Take the time to make sure it’s inserted correctly, and then you’ll find that it doesn’t leak. It’s really comfortable and I’ve never felt it when it’s inside of me.”

“I used the Diva Cup for years but just couldn’t get it to stop leaking, no matter what I did. When I needed a new cup, I decided to try this out one. Thankfully I did! It just worked way better for me and I loved that it was both firm, but not super stiff.”

More Information about the Lunette Cup

We’ve done a full review of this menstrual cup. You can find it here: Lunette Cup Review.

The Saalt Menstrual Cup is a newcomer to the scene and just came out in the past year. It’s made in the USA from medical grade silicone and looks like it’ll be around for years to come.

Initial reviews of the Saalt Cup are excellent and most people that try it really seem to like it. It’s thin and pliable which means that it’s very comfortable, but it’s also stiff enough to be easy to insert.

The thing that we love most about the Saalt Cup is that they offer a 2-cycle, money-back guarantee. This makes it an easy way to try out a menstrual cup for the first time. If you don’t like it, return it to the company for a full refund. Our guess is that you won’t have to though. It’s a great cup!

The Saalt Menstrual Cup is very difficult to find in stores, which is why we recommend finding it online. Do you want to have a safer, more affordable, eco-friendly period experience? Then you’ll need to check out the Saalt Cup on Amazon:

What People are Saying about the Saalt Menstrual Cup

“What can I say about this? I love the Saalt Cup. It fits like a glove, and I’ve found that it very rarely leaks. It’s soft, comfortable and just easy to use overall.”

“A great product from a great company. The instructions are very clear and easy to follow. The cup itself seems to be of very high quality. I’d definitely recommend this period cup to just about anybody.”

“I love how soft the stem is. With other cups, I’ve had to cut it off because it was very uncomfortable and I have a bit of a low cervix. This one? No problems at all!”

More Information about the Saalt Cup

If you want to find out more about this new menstrual cup, you’ll need to check this out: Saalt Menstrual Cup Review.

Take a look at the comparison chart below for current price. But in general, the Saalt Cup is a few dollars cheaper than the Lunette. Does it mean that it’s lower in quality? Definitely not. Both of them are excellent menstrual cups that are made from medical grade silicone.

If you take a look at the chart above, you’ll notice that the Saalt and Lunette Cups are nearly identical. The only difference is that the large Lunette Cup is 2mm longer than the large Saalt Cup.

In terms of stiffness, they are nearly identical as well. Both have some firmness to them, but they are also thin and pliable. It’s a nice balance between being easy to insert, but also comfortable when it’s inside of you.

In terms of design, the Lunette has a bit longer and narrower cup with a slightly shorter stem, while the Saalt Cup is a bit rounder and shorter, with a bit longer stem.

It’s almost like the Saalt Cup company found something that worked (the Lunette) and modified it just slightly so that they could say it’s different. It’s not necessarily a bad thing—isn’t imitation the best form of flattery? 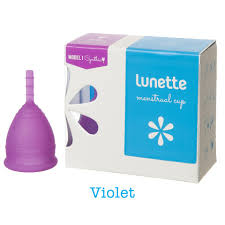 The Takeaway on the Lunette Cup vs Saalt Cup

Both the Saalt Menstrual Cup and the Lunette are excellent menstrual cups. You couldn’t really go wrong with either of them.

They are basically identical cups in terms of design, firmness and sizing.

The differences are mostly in price, and money-back guarantees. For both of these things, the edge goes to the Saalt Cup.

What advantage the Lunette Cup has is that it’s been around for decades and has a serious track record for offering the highest quality product.

The choice is yours! The cheaper newcomer, or the more expensive, proven menstrual cup? We strongly recommend both of them.

Outside of Europe, it can be difficult to find the Saalt Menstrual Cup in stores, which is why we recommend shopping online. You can check out the Lunette Cup for yourself here

Is the Saalt Menstrual Cup the one for you? You’ve made a great choice! It’s a new menstrual cup that’s quickly becoming one of the more popular options. Check it out for yourself over on Amazon:

Saalt Cup vs Lunette Cup: Have your Say

It’s a battle of two very similar menstrual cups, the Lunette Cup and the Saalt Cup. One is new, one is old, but they’re both very high in quality.

Which one is the winner for you? Leave a comment below and let us know your thoughts.