The Saalt Cup and the Lena Cup are very similar to each other. They’re both made in the USA from medical grade silicone according to strict standards. The Saalt Cup has been around for only a few months, while the Lena Cup is a few years old.

Both menstrual cups are similarly priced (a little bit cheaper than something like the Diva Cup or Lunette Cup). They’re also almost identical in size and design. In reality, you almost couldn’t find two menstrual cups that are so close to each other.

Which one to choose? Keep on reading for help in choosing between the Lena Cup and the Saalt Cup. 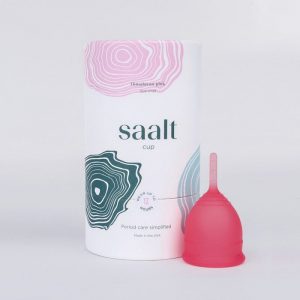 As mentioned, the Lena Menstrual Cup and the Saalt Cup are almost the same. While the Lena Cup has been around for a bit longer, the Saalt Cup is a top-quality menstrual cup that is here to stay.

How to choose between the two? We give a slight edge to the Saalt Cup only because of their 2-cycle money-back guarantee. If you’re unhappy with the Saalt Menstrual Cup, you can return it for a full refund.

The Lena Cup company doesn’t offer this sort of guarantee. However, it’s an excellent menstrual cup and the vast majority of people LOVE it. It currently has one of the highest overall customer ratings among menstrual cups on Amazon.

Introduction to the Saalt Menstrual Cup

The Saalt Menstrual Cup is a newcomer to the menstrual cup world, but it looks like it’s a cup that’s here to stay!

It’s made in the USA from medical grade silicone, according to strict standards. The company is committed to helping people in need and without access to feminine hygiene products.

Perhaps the thing that we love best about the Saalt Cup is that there’s a 2-cycle money-back guarantee. This means that it’s an excellent way to try a menstrual cup without worrying about wasting your money if it doesn’t work.

If you try the Saalt Cup, but find that it’s too difficult to insert, or leaks, you can return it to the company for a full refund. But, our guess is that you’ll stick with it! It’s an excellent cup that works well for the vast majority of people.

Although the Saalt Cup just came onto the market, it already has some excellent customer reviews online. Most people that have tried the Saalt Menstrual Cup really seem to like it.

More Information about the Saalt Cup

For more details about this popular new menstrual cup that’s on the market, check out our full review. You’ll get all the information you need to know if it’s the right cup for your body type and budget.

Introduction to the Lena Menstrual Cup

Even though it’s relatively new to the scene, the Lena Cup has quickly become one of the most popular menstrual cup brands in the world. Here at Reusable Menstrual Cups, it outsells some of the older more established brands (Diva Cup, Lunette Cup, MoonCup) by quite a bit.

It’s so popular for good reason—it’s a top-quality menstrual cup that’s made in the USA from medical grade silicone. Most people find it very easy to insert, and also that it doesn’t leak.

The Lena Cup is so good that we predict many people who were among the first customers will end up using the Lena for the rest of their lives.

The Lena Cup has been around for a few years now, and it has thousands of happy customers over on Amazon. It actually has one of the highest overall ratings in the entire menstrual cup category.

In terms of firmness, there’s the regular Lena Cup which has a slightly above average firmness. The Lena Sensitive is a bit softer than average menstrual cups.

More Information about the Lena Cup

Not sure if the Lena Cup is right for you? Then you’ll need to check out our full review to find out all the details about this popular menstrual cup brand. Check it out:

In terms of size, the Saalt Menstrual Cup and the Lena Cup couldn’t be more identical. This is true for both the small and large versions of each cup.

The only (very) slight difference is that the Lena Cup is 71 mm long, while the Saalt Cup is 70 mm. However, this really does not make any difference whatsoever. 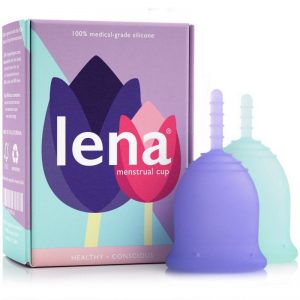 A slight difference is the stem. The Saalt Cup has more of a flat stem with indented ridges, while the Lena Cup has raised lines on it. However, most people find that both of these cups are easy to remove, so this difference isn’t really important.

In terms of firmness, the Lena Cup has two versions, a regular and sensitive model. The regular Lena Cup is considered to be slightly above average, but it’s certainly not one of the stiffest menstrual cups.

The Lena Sensitive is a softer menstrual cup, but it’s actually not one of the softest menstrual cups you can buy. In reality, it’s just below average firmness.

How does the Saalt Cup compare? It’s comparable to the Lena Sensitive, in that it has a slightly below average firmness to it.

Which Menstrual Cup Firmness is Right for Me?

Why does menstrual cup firmness even matter, you may be asking yourself. For beginners, we generally recommend sticking with one of the firmer menstrual cups like the Lena Regular.

You’ll find that they’re easier to insert because once you put it inside you, it should just pop open by itself and into place.

The softer menstrual cups like the Lena Sensitive or the Saalt Cup can feel very comfortable inside you (not that firmer menstrual cups feel uncomfortable for most people though!). This is because they don’t press so strongly against your vaginal canal walls, or your urethra.

The downside to soft menstrual cups is that they’re a bit more difficult to insert. Softer cups don’t always naturally pop open and into place easily. You sometimes have to jiggle them around a little bit. You can also try twisting them one direction, then the other to get them to fully open.

The Takeaway on the Saalt Cup vs Lena Cup

If you’re looking for your first, or next menstrual cup you couldn’t go wrong with either the Lena Cup or the Saalt Cup. Both are top-quality menstrual cups that have plenty of satisfied customers.

For beginners, we recommend sticking with the Lena Cup, regular. It’s a firmer menstrual cup that will be a bit easier to insert. Once you fold the Lena Cup, and insert it, it should just pop open pretty naturally inside of you.

In reality though, even beginners should be fine with the Saalt Cup. Plus, you’re protected by the 2-cycle money-back guarantee if you can’t get the hang of it.

However, if you’re experienced with menstrual cups are looking to buy your next one, then consider the Lena Sensitive or the Saalt Cup. Both of them are softer menstrual cups which will feel very comfortable inside you.

Saalt Cup vs. Lena Cup: Which one is the winner? Both are excellent menstrual cups!

The Saalt Cup is quickly becoming one of the more, “Made in the USA” menstrual cups. Although it’s new to the scene, it’s clear that it’s here to stay. Initial reviews are excellent and most people that try it really seem to like it.

Do you want to go green for your period? And perhaps save a ton of money as well? Then you’ll need to check out the Saalt Cup for yourself over on Amazon:

Does it sound like the Lena Cup is right for you? You really couldn’t go wrong with this top-quality menstrual cup that has thousands of 4-5 star reviews over on Amazon.

If you want to have a safer, healthier, cheaper and more eco-friendly period experience, then you’ll need to check it out for yourself today:

Saalt Cup vs Lena Cup: Have your Say

What do think about the Saalt Cup, or the Lena Cup? Which one comes out ahead? Or, are you considering another top-quality menstrual cup brand?

« How to Fold the Lunette Cup
Vaginal Discharge: The Ultimate Guide to Reasons, Treatments and More »