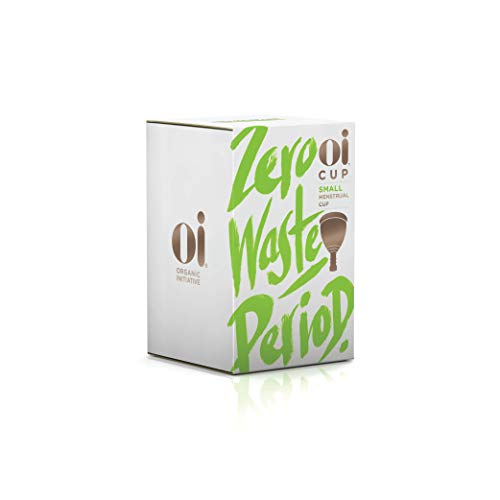 Oi (Organic Initiative) is a company based in New Zealand that makes a line of top-quality feminine hygiene products, including pads, tampons and the Oi Cup.

Although the company is new to the scene, we think that they’re here to stay. They are a great company that makes some top-quality, eco friendly feminine hygiene products.

Made from Thermoplastic Elastomer

Most other cups, including the Diva Cup, Lunette Cup, and Mooncup are made from medical grade silicone.

The main advantage of TPE is that they feel soft to the touch, and can mold to your body a bit better than silicone. However, they tend to lose their shape and stiffness over time, and have a bit of a shorter lifespan.

You can learn more about that here: TPE vs Silicone Menstrual Cups.

Where to Buy It?

It can be very difficult to find the Oi Menstrual Cup in stores, particularly if you don’t live in New Zealand. This is why we recommend shopping online. You can check it out for yourself over on Amazon:

Keep on reading for the full Oi Cup review!

If you’re looking for your first, or next menstrual cup, the Oi Cup should be at the top of your list. It’s a top-quality menstrual cup that’s made in New Zealand from medical grade Thermoplastic Elastomer.

People that try it really seem to like it, and it has some excellent customer ratings and reviews.

In terms of sizing, the Oi Cup is a bit unusual in that there are 3 sizes. Most other companies make just a small and a large. The small is very small and great for teens. The large Oi Menstrual Cup has a very high capacity and makes an excellent choice for someone with a very heavy flow.

Overall, it’s an excellent menstrual cup that’s made by a great company. We give it out solid recommendation and we’re happy to see a new addition to this world of eco-friendly period products.

There are three sizes of Oi Menstrual Cup. We’ll give you some details about each one here:

Suitable for people under 18 who don’t have sex regularly.

For people under the age of 25 who haven’t given birth vaginally.

For people over the age of 25, or those who’ve given birth vaginally

Large: For People With a Heavy Period

If you have a very heavy flow, you may be tired of using tampons and having to change them every hour or two. A regular tampon holds 5 ml of menstrual fluid, while a jumbo one has room for 10.

Compare this to an average menstrual cup that can hold 30 ml (the small and medium Oi Cup). That’s already 3x more than a jumbo tampon.

However, a large Oi Cup that holds 40 ml can be kind of a game changer. If you’re used to changing your tampon every 2 hours, you may actually make it 6-8 hours before having to empty your menstrual cup.

Pair your Oi Cup with a pad and you may even be able to sleep through the night!

In general, teenagers or younger girls who are just starting their period will need a very small menstrual cup. There is one company, Intimina that sells a menstrual cup specifically for this age group: the Lily Cup One.

However, the Lily Cup One is a collapsible menstrual cup and most people find it pretty difficult to insert correctly. We prefer the small Oi Cup hands down due to ease of use.

The Oi cup has a very small diameter of 35 mm (the average is 40 mm), and is shorter than average (60 mm, while the average is 70 mm). This makes it less intimidating than some of the bigger menstrual cups when you’re just starting out.

Sounds like the right menstrual cup for you? You can check out the Organic Initiative Menstrual Cup for yourself over on Amazon:

Oi: About the Company

This company began in the last few years and they offer a wide range of period products. They sell organic pads and tampons (entirely biodegradable), as well as this menstrual cup.

Here’s how the company describes itself:

“We are a group of passionate and authentic people who care deeply about our health and wellbeing, about each other and about our world.”

They are involved in a bunch of projects to help the world, including the following:

What People are Saying about it:

“I can’t believe that not everybody is using something like the Oi Menstrual Cup. It’s an excellent way to save our Earth, and have a better period experience.”

“I’ve used the Diva Cup before, and find that the Oi Cup is a bit softer and softer because of the different materials it uses.”

“I found that the Oi Cup worked well for me, and was easy to insert and remove. I was kind of surprised that it didn’t leak, but it seemed to seal well. The instructions included are great and really helped me to get started.”

What about Sex with the Oi Menstrual Cup?

A common question that people have is whether or not they can have sex with the Oi Cup, or other normal kind of menstrual cup. Our cheeky answer is that it depends on what kind of sex!

Trust us. People have tried having penetrative sex with a menstrual cup and it was pretty uncomfortable for both parties involved. Just don’t go there!

Consider the Intimina Ziggy Cup Instead for Sex During your Period

If you’re looking to have some non-messy period sex, then you’ll want to consider the Ziggy Cup. It’s made from medical grade silicone, the same material as most menstrual cups not the Oi Cup.

The reason it works so well for sex is that it’s a flat, flexible disc that fits below your cervix. It’s comfortable, and most people don’t even notice it during sex.

The only real negative is that it can be a more difficult to insert than something like the Oi Cup. This is because you have to put it right under your cervix, which isn’t that easy if you have short fingers or a long vaginal canal.

You can check out the Ziggy Cup for yourself right here:

If you’re currently using tampons, you’re probably used to changing it out every 8 hours to decrease your risk of TSS. Is this the same with menstrual cups? And, is the risk of Toxic Shock Syndrome higher or lower than with tampons? Let’s find out!

Every year, there are thousands of cases of TSS from tampons. However, when you consider the number of tampon users around the world, the overall risk is actually very, very low. Most doctors go through their entire careers without ever seeing a case of this!

This risk is even lower when you take basic precautions such as changing your tampon frequently enough, and using the lowest absorbency level possible.

To date, there’s only one reported case of Toxic Shock Syndrome from a menstrual cup. So although this risk does in theory exist, it’s very low and not something to worry too much about.

That said, you should take basic precautions such as taking out and cleaning your cup every 12 hours (maximum), washing your hands before handling the cup, and making sure to sterilize it between periods by boiling it in a pot of water on the stove for 5 minutes.

The Takeaway on the Oi Cup

The Small Oi Menstrual Cup is an excellent choice for teenagers, or even younger people who are just starting their periods. The Large Oi Cup is a good choice for people who are older or given birth vaginally, and have a very heavy flow. We LOVE the high, 40 ml capacity of this one.

Where to Buy the Oi Menstrual Cup

Does it sound like the Oi Cup from New Zealand is the right one for you? You can check it out for yourself over on Amazon:

What are your thoughts on this menstrual cup from the Organic Initiative? Is it a winner, or are you considering another one? Leave a comment below and let us know. We’d love to hear from you.

BodyBay Menstrual Cup Review: Is the Right One for You?

Leasen Menstrual Cup Review: Is it the Right One for You? 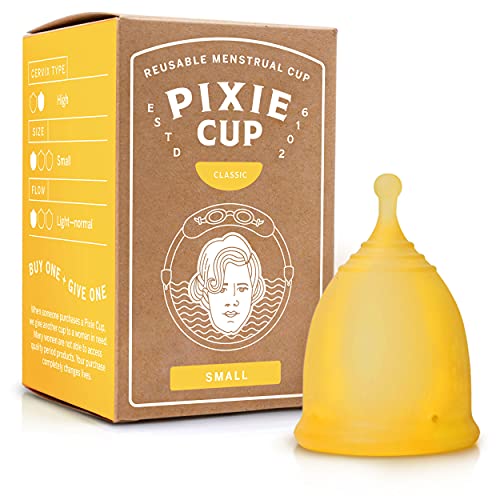