The Lunette Cup and the Anigan Evacup are among the most popular menstrual cup brands in the world. It’s a battle of the old vs. the new for these ones. The Lunette has been around for years, while the EvaCup is a bit of a newcomer to the scene.

All about the Lunette Cup

The Lunette Cup, manufactured in Finland is one of the highest rated menstrual cups and for good reason: it’s a very high-quality product that almost all people are very happy with it. It’s easy to insert, and remove, and most people find that it doesn’t leak. The Lunette has a nice stiffness to it which many people prefer.

The only negative reviews on Amazon are about menstrual cups in general and are not about the Lunette Menstrual cup specifically.

On the other hand, the Anigan Evacup is an up and comer but it’s fast becoming a popular option. In only a couple of years, it’s firmly found a place on the “Top 5 Menstrual Cup Charts” around the world.

The Anigan Eva Cup is made in the USA, and is a cheaper alternative to the more established Moon Cup, Diva Cup and Lunette Cup. This is good news for consumers and here at Reusable Menstrual Cups, we love that there’s more economical, yet still high quality choices out there.

Like the more expensive cups, it’s made from the highest quality medical grade silicone and it’s a product that you can feel safe using. The key is to avoid the very cheap menstrual cups that are very low-quality, however, the EvaCup certainly isn’t that.

Both of these popular period cups come in two sizes: Small and Large. Both of them are available in a nice range of colours. 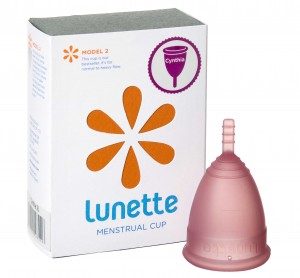 In terms of design, the Lunette Cup and the Anigan Evacup are quite similar.

However, one of the small differences is the length of the stem. The Lunette Cup has a longer one, resulting in an overall difference of about 5 mm for both the small and large sizes.

Both of these cups are kind of “average” in length, and neither of them will work well if you have a low-cervix. In that case, you’d want to consider something like the FemmyCycle Low Cervix Model.

However, if you have a regular, or long cervix length, then either of these cups is fine. Check out this menstrual cup lengths comparison chart for more details:

In terms of menstrual cup capacities, both the small and large Lunette Cups are 5-7 ml lower than the Anigan Evacup, respectively. If you have an average, or less than average flow, then either of these cups will be fine.

However, if you have a very heavy period, you’ll probably want to consider the Anigan EvaCup. It’s one of the highest capacity menstrual cups you can buy. An extra 5-7 ml actually does make a difference. Maybe you can pair it with an overnight pad, and sleep through the night?

The Anigan Evacup large has a very high capacity of 37 ml, one of of the biggest cups available. This can make it an excellent choice for those people who have heavy periods.

Anigan Evacup vs. Lunette Cup: Which one is Right for You?

If you’re looking for a high-quality cup, you really couldn’t go wrong with either of these period cups. They’re both made by reputable companies from the highest quality medical grade silicone.

The Lunette cup is more expensive while the Anigan Evacup is a bit cheaper.

If you have a heavy period, the large size of the Anigan Evacup with a capacity of 37 ml can make an excellent choice for you.

The best place to buy menstrual cups is on Amazon. There is a huge variety to choose from and the prices are often cheaper than in the stores. Check out the chart below to buy a menstrual cup on Amazon today:

For the full reviews of these two popular menstrual cups, please see the following:

Review of the Lunette Menstrual Cup

Anigan Evacup Review: Is it the Right One for You? Find out Here!