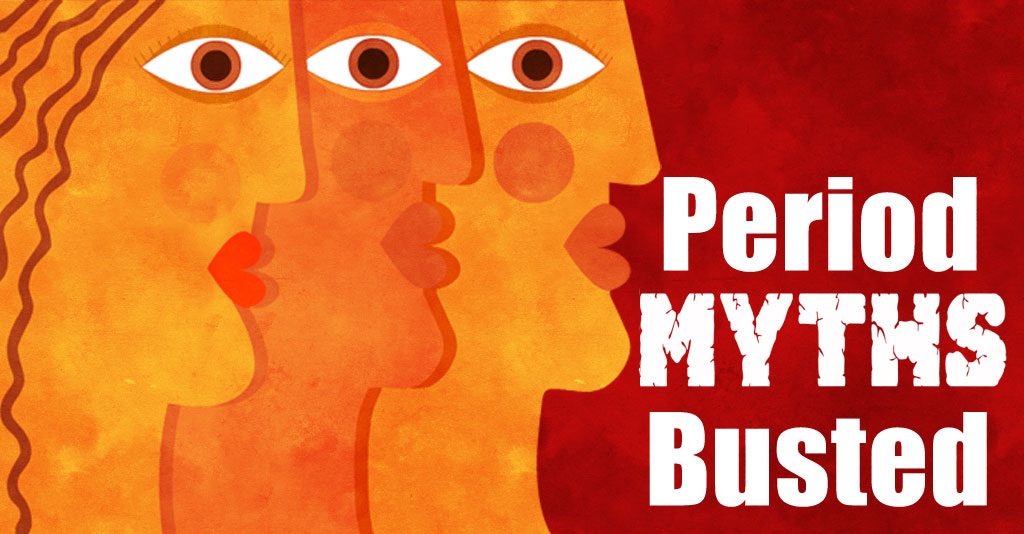 For far too long, most people got their information about periods from locker-room and school-yard whispers. Some of it was true, must of it wasn’t and consisted of these period myths.

In the age of the Internet, information about menstruation and periods is available to more people. Let’s bust up these common period myths and shed some light on them. Here’s to a healthier, happier, safer period experience

Period Myth #1: You Can’t Exercise During your Period

Some people don’t exercise during their period because they think it’s harmful for their bodies. This isn’t true. It is possible to continue with your normal exercise routine, but pay attention to how your body feels.

If you have cramps, or feel fatigued, then why not do some light exercise instead? Go for a walk instead of a run. Or, a short bike ride instead of a serious weightlifting session.

In reality, you only lose around 4 tablespoons of blood during your period. This isn’t a lot, and is certainly nothing to worry about. So, just continue on with your normal activities, as long as you feel good.

Period Myth #2: You Can Delay or Reduce your Period

There are old wives tales out there with tips for how to delay your period or reduce your period flow. They don’t really work.

Your period will happen when it happens! It’ll be as heavy as it’s going to be. Of course, there are medications you can get from your doctor to influence both of these things (birth control for example). But, natural remedies? Not so much.

Period Myth #3: You Can’t Get Pregnant During your Period

Of all the period myths, this is perhaps the most important one to remember. You can indeed get pregnant while on your period, so continue to use your regular protection.

Sperm can live for a few days, and you can ovulate soon after bleeding. If you time things right by having sex right at the end of your period, and you ovulate a bit early, you can get pregnant.

Period Myth #4: You Can’t Swim in the Ocean During your Period 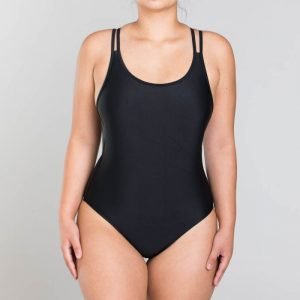 Some people are worried about sharks being attracted to menstrual blood if they swim in the ocean during their period. This is a myth.

The amount that you menstruate at any given time is minimal, and presumably, you’ll be wearing some protection (menstrual cup or tampon), so the blood will be staying inside your body during the time that you’re swimming.

More good news: there has been no reported cases of sharks attacks being caused by menstruation.

In other news, there is now a line of leakproof bathing suits available from Modibodi. Made by an Australian company, they can absorb as much as a jumbo tampon. Check them out here: Modibodi Leakproof Bathing Suits.

Some people feel that it’s important to remain a virgin for cultural or religious reasons. They also might feel that using tampons or a menstrual cup causes them to not be a virgin anymore.

The reality is that having sex for the first time means that you’re no longer a virgin. Putting something into your vagina like a tampon has nothing to do with this.

Do these feminine hygiene products cause the hymen to stretch? Maybe. But, so can horseback riding, exercise, or just getting older. Some people are born with a prominent hymen, others are not. It’s really not a good indication of whether someone is a virgin, or not.

Period Myth #6: You Can’t Have Sex During your Period

Here’s something that you maybe didn’t know…

There are non-messy options for period sex. The first one that you should know about are Instead Soft Cups, which are flat, flexible discs that fit right below your cervix. Most people report that they can’t feel them during sex. The major negative to them is that they’re disposable.

Recently, Intimina came out with a reusable option, the Ziggy Cup. It’s similar to Soft Cups in design and function, but it’s made from medical grade silicone (same as most menstrual cups). That means that it can last for at least a few years.

Non-messy sex during your period? It’s entirely possible with a Ziggy Cup, or Soft Cup.

Period Myth #7: You Shouldn’t Go Camping During your Period

Similar to the swimming in the ocean thing, some people are scared of going camping during their period because they’re scared of bears.

The good news is that there are no reported cases of bear attacks being caused by menstruation. Don’t worry! Go camping and have fun, even during your period.

One of the period myths that people have is that menstrual fluid consists only of blood. In reality, it’s about 50% blood, but 50% other things. It actually consists of:

Period Myth #9: You Should Get your Period By This Age

There is no age at which most people get their period. It can happen between the ages of 9 and 15, and is often similar to other women in your family. If you haven’t gotten your period by the age of 15, then check with your doctor. 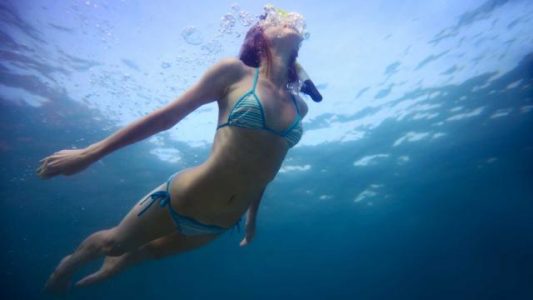 Period Myth #10: If you Miss a Period, You’re Pregnant

When you first start menstruating, your cycle with probably be pretty irregular. It can be this was for 6 months to a year, or even longer. You may actually miss a cycle. If you’ve been having unprotected sex, then suspect pregnancy.

If you haven’t been having sex, or there’s a 100% chance of no “accidents,” then don’t worry about it. You’re probably not pregnant.

Other reasons why you might miss a period include: Stress, illness, and changes in weight or nutrition.

Period Myth #11: A Tampon or Menstrual Cup Can Get Lost

One of the period myths that we’re going to bust up is this one about things (menstrual cups or tampons) getting lost in your vagina. At the end of your vagina is the cervix. It’s a tiny opening through which menstrual fluid can get through, but not much else (except when giving birth).

So, even if you’ve having a difficult time getting your menstrual cup out, it’s not “lost.” You will be able to remove it. Relax, take a deep breath and don’t worry about it.

If you can’t, then get a trusted partner to help you. Or, go to the doctor and they’ll be able to remove it in seconds.

Period Myth #12: Nobody Gets Toxic Shock Syndrome These Days

Toxic Shock Syndrome is a serious thing that actually happens to people (Check these TSS Warning Signs here). Although it is quite rare when you consider the number of tampon users and compare it to the number of cases each year, it still does happen.

However, the risk is low if you take basic precautions. These include:

Period Myth #13: Menstrual Cups are More Likely To Cause TSS than Tampons

There have been reports in the news lately about how menstrual cups are more likely cause toxic shock syndrome than tampons. This firmly falls into the “period myths” category.

To date, there has been one reported cases of TSS being caused by a menstrual cup. It happened because the person cut themselves with their Diva Cup when inserting it at the beginning of their period. They then left the cup in way too long.

Like tampons, basic precautions should be taken with menstrual cups in order to avoid toxic shock syndrome, mainly emptying it often enough. 12 hours is the recommended maximum by most menstrual cup companies.

Period Myth #14: PMS is all in your Head

If you experience PMS, you know that it’s not all in your head. It is indeed very real. Mood swings, cravings, etc. But, others may tell you that it’s just an excuse to be grumpy.

The good news is that mood swings and PMS is a real thing caused by fluctuations in hormones and chemicals, particularly lower levels of serotonin.

Period Myth #15: You Need to Change your Diet

One of the period myths that people believe is that they need to change their diet during their period. Some people increase their meat intake to compensate for lost iron.

However, the amount of blood you lose during your period is actually quite minimal, so no changes in diet are necessary. Just continue on with what you normally do.

That said, some people, particularly vegans or vegetarians with heavy and/or long period may be low on iron. If you feel fatigued a lot, go the doctor to get your iron levels checked (it’s a simple blood test).

Period Myths: Have your Say!

What are your thoughts about these Top 15 Period Myths? Leave a comment and let us know what you think is the most common period myth that people actually believe.

Scuba Dive on your Period: Possible?