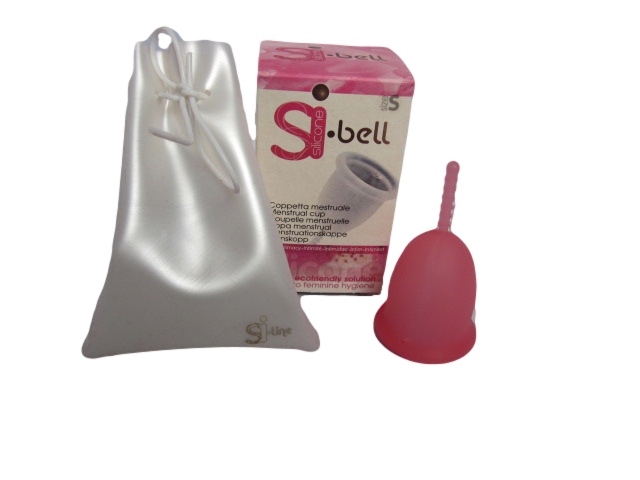 Do you want to know whether or not the Si Bell Cup is right for you? Then keep on reading for all the details you need to know about this popular menstrual cup.

The Si-Bell Cup is made in France from medical grade silicone. Here are some details about it:

The Si-Bell Menstrual Cup is a top-quality European made menstrual cup that is a nice choice if you’re looking for a softer menstrual cup. In terms of design, it’s most similar to the made in the USA Sckooncup.

Both the Si Bell and the Sckoon Cup have some excellent customers reviews online.

Soft menstrual cups are sometimes not the best choice for beginners because they don’t open as easily inside of you as some of the more firmer ones. However, they do feel very comfortable as they won’t press strongly against your vaginal canal walls.

However, despite being so soft, many reviewers commented that the Si Bell was easy enough to insert, despite being the first cup that they tried. It’s well designed, which may be the reason why it’s so easy to insert, even though it’s a very soft menstrual cup.

You can check out the Si-Bell Menstrual Cup for yourself over on Amazon: 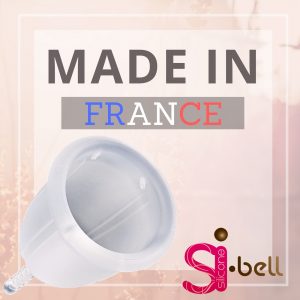 There are 2 sizes of Si-Bell Cup (small and large). Here are the specs:

The small (size 1) is for people who haven’t given birth vaginally, or are under the age of 30.

The large (size 2) is for people who’ve given birth vaginally, or are over the age of 30.

In terms of length, the Si-Bell Menstrual Cup at 74 mm is longer than average. For example, the Diva Cup is 70 mm, while there are even some low-cervix menstrual cups (FemmyCycle Low Cervix, Merula Cup, Meluna Shorty) that are as short as 50 mm.

If you have a long vaginal canal/high cervix, then you’ll love having a longer menstrual cup because you’ll find it easier to remove.

In order to remove your menstrual cup, you should grasp the base of the cup. However, you may not be able to reach it. In this case, you have to pull down gently on the stem until you can reach the base. A longer stem makes this process easier.

***Note*** If you find that the Si Bell Cup is too long, it’s possible to trim the stem. Start small, and only trim a little bit at a time. And don’t do this when the cup is inside of you!

Heavy Period? Can I use the Si-Bell?

If you have a very heavy period, the Si Bell Menstrual Cup may not be the best option for you. For the small, 20 ml is quite a bit below the average capacity of around 30 ml. The large Si-Bell comes in at exactly that.

If you have a very heavy period, there are some high-capacity menstrual cups that hold 40 ml or more (the Super Jennie for example). This can make a big difference in terms of how often you have to remove, and then reinsert your menstrual cup.

If you pair a large menstrual cup with something like an overnight pad, you might even be able to sleep through the night of your heaviest flow, without having to get up to deal with your period. Did you ever think this would be possible?

Where to Buy the Si Bell Menstrual Cup

The Si-Bell Cup is difficult to find in stores, especially outside of Europe, which is why we recommend shopping online. You can find it here:

What People are Saying about the Si-Bell Menstrual Cup

“The Si Bell Cup is very soft, but it’s still super easy to insert. I’ve tried some of the firmer menstrual cups (MoonCup, Diva Cup) but they were uncomfortable and gave me cramps. This one just worked well for whatever reason.”

“The SiBell Menstrual Cup is soft, comfortable, and very pretty. The instructions were easy to understand and follow too. My only complaint is that the capacity of the small is pretty low, and I have to empty it a bit more than I want on my heavy flow days.”

“I wanted to love the Si Bell Menstrual Cup, but it’s so soft that I could never really get it to open. Even with a bunch of different folds, I couldn’t figure it out. And of course, this means that it leaks almost every single time I use it, unfortunately.”

How to use the Sibell Menstrual Cup

If you’re new to menstrual cups, you’ll probably want to know how to use it!

The first thing to keep in mind is that there’s a serious learning curve to using a menstrual cup. It takes most people at least 3-4 cycles to really get the hang of it. The key is to keep on trying and don’t give up! You will eventually figure it out.

Beyond that, here are a few simple steps to get started with the Sibell Cup. 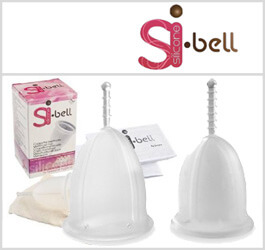 What about Sex with the Si-Bell Cup?

A common question that many people have is whether or not they can have sex while wearing the Si-Bell Menstrual Cup. It’s a great question with a very easy answer: no, not for penetrative sex.

For anything up to penetrative sex, the Si Bell Cup is a nice option because unlike with tampons, there are no strings hanging out. Your partner may not even know that you have your period!

But for penetrative sex, regular menstrual cups like the Si-Bell won’t work because there just isn’t room for everything “up there.” And it’s also designed to sit low in the vaginal canal.

Even if you did try to have sex with a regular menstrual cup, you, as well as your partner would probably find it pretty uncomfortable. We DO NOT recommend trying this!

Consider the Intimina Ziggy Cup Instead

Up until 2018, you didn’t have a lot of options for sex during your period:

Sea sponge tampons, in theory are reusable for a couple of months. However, in our experience, it’s pretty difficult to keep them clean and sanitary.

Soft Tampons and Soft Cups are single use only.

It’s for these reasons that we’re very happy Intimina (makers of the Lily Cup) came out with the Ziggy Cup. In terms of design, it’s very similar to a Soft Cup. It’s a flat, flexible disc that sits right below your cervix.

However, the Ziggy Cup is made from medical grade silicone, and is reusable for a few years. Finally, a non-disposable option for non-messy period sex!

You can check out the Intimina Ziggy Cup Here:

What about Toxic Shock Syndrome and the Si Bell Cup?

You’re probaby used to the warning labels on tampons that say you have to change it every 8 hours in order to reduce your risk of Toxic Shock Syndrome. Is the risk of TSS higher or lower with the Si-Bell Cup that with tampons? Let’s find out!

To date, only one person has ever gotten Toxic Shock Syndrome from a menstrual cup. There are thousands of people who get it each year from tampons. Of course, there are far more tampon users than cup users so this must be taken into account.

However, it does appear thar the risk with menstrual cups is extremely low, especially if you take the basic precuation of taking out your cup every 12 hours to clean it well. Then, you can sterilize it at the end of your cycle by boiling it in a pot of water on the stove for five minutes.

You should also take precuations with tampons, namely wearing them for eight hours max, and using the lowest absorbency level possible.

The Takeaway on the Si-Bell Cup

Overall, the Si-Bell Menstrual Cup is a solid choice if you’re looking for a very soft menstrual cup. It’s made in France from top-quality medical grade silicone and has some excellent reviews and ratings from customers.

Despite being so soft, even beginners to menstrual cups found this one reasonably easy to insert. Removal is a breeze with the Si-Bell Cup because even if you don’t squish it, it’s so soft that it doesn’t hurt when coming out.

If you have a long vaginal canal, you may want to consider this period cup because it’s a little bit longer than average. This will make it a bit easier to grasp the stem, if it’s lost “up there.”

However, if you have a heavy period, the Si-Bell Cup is probably not for you, especially the small. At 20 ml, that’s about half of the higher-capacity menstrual cups.

If you want to have a comfortable, safe, eco-friendly and affordable period experience, then you’ll need to check out the Si-Bell Menstrual Cup on Amazon:

Have your Say about the Si Bell Menstrual Cup

What about your thoughts about the Si-Bell Cup? It is a buy? Or, are you considering another menstrual cup?

V-Cups Menstrual Cup Review: Is it Right For You?